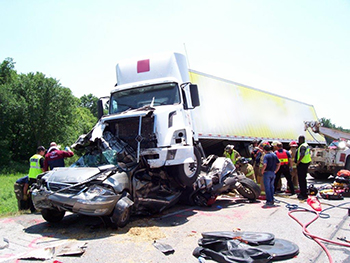 The Federal Motor Carrier Safety Administration is the government agency charged with regulating the trucking industry. Despite this, the number of injuries and deaths on highways and county roads caused by the negligence of truck drivers is exceedingly high.

One statistic reveals that fatal accidents involving large trucks was as high as 3,802. Injuries from such crashes was recorded at 77,000, while property damage was as high as 253,000.

There are many reasons why large trucks pose such a danger to the travelling public. First, the eighteen wheel trucks are so large and so heavy that they cannot be brought to a stop easily. Second, some drivers have bought in to the dangerous practice of speeding. Many truck drivers tend to “overdrive” their headlights. Third, trucking companies expect their loads to be delivered at certain times. This puts pressure upon drivers to act accordingly. The result is driver fatigue which reduces concentration and leads to fatal crashes. Finally, there is the influence of legal as well as illegal drugs, coupled with the use of cell phones and texting. Its evident that our roadways and highways must be approached with caution as we try to share them with truck drivers who are often in a hurry to perform for their companies.

Norman & Edem has continued to achieve great results in handling such cases, including the $62.7 million result in the multi vehicle wreck which was reported to be the worst of its kind in Oklahoma’s history.

When such an unfortunate tragedy occurs it is important to call immediately. Past experience shows that trucking companies and their lawyers and their insurance companies, get to the scene of crashes as soon as they occur. They do this in order to begin planning their defenses as soon as they learn of a crash.

It is important to call us immediately so that we can start working to preserve your rights or the rights of your loved one.